If We Fail to Adapt, Our Students Lose 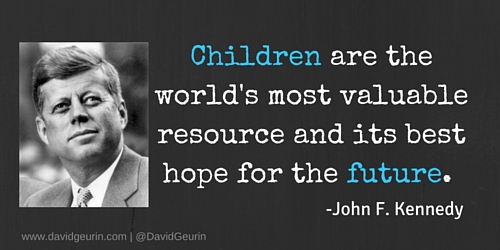 I’ve been reading The Passage of Power: the Years of Lyndon B Johnson by Robert A. Caro. It’s the fourth book in a series of autobiographies by Caro tracing the life and political career of LBJ. It’s a fascinating read, named one of the 10 best books of 2012 by the New York Times.

In the 1960 Democratic Primary Elections, John F Kennedy utilized television to his incredible advantage. Johnson was hesitant to enter the race, even though he badly wanted the nomination, largely because he feared the possibility of defeat. He wanted it almost too badly, and would not publicly announce as a candidate. His fear of losing and fear of being humiliated in defeat paralyzed him until at the last moment, he declared. But it was too late.

While Johnson had been reluctant to take a risk, Kennedy was developing a highly effective campaign machine. He traveled the nation building support, but even more importantly, he leveraged the power of television to his great advantage. Every chance he got, he was in front of the American public, in their living rooms, connecting with them through their television sets.

Johnson thought television was a waste of time. He thought Kennedy was too flashy and that he lacked substance. Johnson was proud of his accomplishments as leader in the Senate. He blasted Kennedy for his weak record as a senator, noting that JFK had accomplished very little as a lawmaker. Kennedy rarely even showed up for work. He was too busy running a campaign for President.

Regardless of his Senate record, JFK won the nomination. In a strange twist, he invited LBJ onto his ticket as his vice president. Begrudgingly, Johnson accepted the offer to be Kennedy’s running mate. Kennedy went on to win the election in 1960, beating Republican Richard Nixon.

In the same way Johnson failed to recognize the power of television, too many educators today are not adapting to the digital transformation of the modern age, a revolution even more powerful than television. They are struggling to adapt to these new literacies. They think of social media and other digital tools as optional at best, and at worst they completely reject that these tools have any merit for learners.

Some pay lip service to the idea that technology is important, but they do very little to model the use of digital tools, in their own lives or in their classrooms. They rarely use technology for learning, and when they do it is such a special event that it is more of a gimmick than a way of doing business. They cling to their content as if it must be the most important thing for their students to know, without ever questioning how irrelevant it might be for some.

Do reading, writing, and math skills still matter? Absolutely. Every person should have skills in these traditional literacies, but we can’t stop there. Those skills are just the beginning. Students need to also know how to apply these basic skills in ways that generate value in today’s world. They need to practice these skills in modern applications. Learning digital literacies is not about learning gadgets or gimmicks. It’s about learning how to collaborate, communicate, create, and think in a connected, information-rich world.

So instead of writing that research paper, ask students to create blogs. Incorporate social media into studies of literature and history. Reach out to experts in various fields to demonstrate the power of connections. Examine how modern films, music, and art impact the world of science and social science. Develop a classroom culture that goes beyond memorizing and testing. We need students to develop the skills of makers, designers, and innovators.

If we are slow to respond to how our world is changing, we are doing our students a disservice. We can’t afford to make our own comfort and preferences the priority, now when seismic shifts are happening all around us that demand we change. If we want our students to win at life in a digital world, we have to act as if it’s that important. Our students are counting on us. We have to lead.

If educators fail to adapt to the rapidly changing world, our students will suffer. Someone else will get the job. Someone else will solve the problem. Or even worse, the problem won’t get solved. We will limit the possibilities of our most important resource, our children. simply because we didn’t take a risk, try something new, or continue to be a learner. Like LBJ, if we are slow to adapt, it will result in failure. We all stand to lose.

Question: How are you adapting as an educator and as a learner? What have you done to step out of your comfort zone? I want to hear from you. Leave a comment below or respond on Twitter or Facebook.

END_OF_DOCUMENT_TOKEN_TO_BE_REPLACED

I believe technology is a wonderful thing. I rely heavily on it every day and it is one of my passions. I facilitate my school’s technology advisory  committee and am…

END_OF_DOCUMENT_TOKEN_TO_BE_REPLACED

3 Conversation Starters for the School Year

Last year, as I documented some of the crucial things that we needed to discuss to further innovative practices in our school, I feel more prepared to have some crucial…

END_OF_DOCUMENT_TOKEN_TO_BE_REPLACED

Dear Lone Wolf, It seems odd to speak of lone wolves to you, a person that is so intricately… connected. And yet, as you read on, you will relate to…

END_OF_DOCUMENT_TOKEN_TO_BE_REPLACED

cc licensed ( BY ) flickr photo shared by Tawheed Manzoor “You take the blue pill, the story ends, you wake up in your bed and believe whatever you want…

END_OF_DOCUMENT_TOKEN_TO_BE_REPLACED

Last week, I had a chance to meet with some parents from our school, and plan an upcoming 60-minute meeting in April – only this is not going to be…

END_OF_DOCUMENT_TOKEN_TO_BE_REPLACED

At the first staff meeting in August, I asked the staff at my new school to write a notecard answer to the following question: “What do you need from your…

END_OF_DOCUMENT_TOKEN_TO_BE_REPLACED

This is a cross post from my blog. As one of the technology leaders at my school, I have had to immerse myself in technology.  This post describes some of…

END_OF_DOCUMENT_TOKEN_TO_BE_REPLACED

The bar has been raised.

“How do we get reluctant administrators on board with utilizing technologies to communicate, connect, and collaborate?” This is one of the most prevalent questions I encounter when chatting with educators…

END_OF_DOCUMENT_TOKEN_TO_BE_REPLACED

Is The Money Worth It

Recently, I read and article in Education Canada by Ron Canuel.  He reviews the issue of increased student learning and technology cost. I have read more than a few articles…

END_OF_DOCUMENT_TOKEN_TO_BE_REPLACED

I will give you my trust

END_OF_DOCUMENT_TOKEN_TO_BE_REPLACED

Choose your position: Are you a gatekeeper, policemen, guard… or teacher? All these jobs are necessary, but which one belongs in schools? Choose your battle: Filters that also filter learning…

END_OF_DOCUMENT_TOKEN_TO_BE_REPLACED

I have been deliberating many things as we prepare for the start of the school year.  One of these items has been advancing the technological literacy of my staff. With…