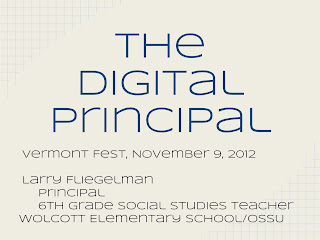 In November, I gave a presentation (resources to be found here) to a packed room row at Vermont Fest,

<snip> (For the rest of the introduction and a summary of the first two parts of the presentation, please read part ONE and part TWO.)

So, here is part THREE of my three-part summary.

Evernote has eaten my brain. That must be why they chose an elephant for a mascot – elephants love brains. Wait, no. Elephants never forget; that’s why they chose the long-nosed pachyderm.

Anyway, Evernote has become my brain, not eaten my brain. I’ve written about Evernote twice before: “Evernote is Becoming My Brain” and “Evernote for Notes Everywhere.” As you can see, this brain replacement has been a long time coming (and a longer time needed,

It all started back when I started teaching. It must have been the 3000 significant decisions a day or something because my memory starters to go. Then, I had children and became

an administrator – kaboom – my memory was shot (at least I think that is when it all started).

Anyway, most of my readers will understand that there is far too much for most of to remember without help. Over the years, I have tried pads of paper, three-ring binders, spiral notebooks, composition books, Palm’s notes, Mac stickie notes, and finally Evernote.

To make a long story short, I now use Evernote for nearly everything. I keep a notebook for each staff member, each class, many students,

each major area of my job (curriculum, data, assessment, facilities, special education, PBIS, and technology just to name a few). All told, I have about 83 school-related notebooks. Within each notebook there are from one to 79 notes. I have a lot to keep track of.

The thing that I like best about Evernote is the fact that my notes are synchronized among every device I use. Evernote works on iOS, Android, Mac, Windows, the web, Linux, and probably more. Evernote does not yet work on my toaster – if only Steve Jobs were still around.

One last feature of Evernote that is so useful: integration. Notability, I mentioned it in the last blog post, can send notes right to Evernote. Google Drive can as well. I really cool new tool for Evernote is the Powerbot extension for Chrome. Powerbot connects Evernote to gmail and gcal. I love the meeting minutes template that Powerbot creates in Evernote for each appointment

in my calendar. I am still figuring out how to really use Powerbot, but I am very impressed so far.

So, with a device in my hands at all times, Evernote has become my brain. Thank goodness that I have finally have a brain that never forgets.